Engen, the central city of the Hegau county, by Mathäus Merian, 1640

The city's contour has been preserved till now . At the foot of the Landlord's castle is the fenced in "Schloßmühle" (castle's mill) with the millwheel between two buildings. Some of my ancestors were born and lived and died there.

This article gives some insight to the life of Southern German farmers in the past centuries.The life of an individual was only partly concerned with obligations to the landlord or the church. More than anything else the social class of the village into which he/she was born determined the whole life. The knowledge about the basic rules of the rural life in the past represents not a bad chance to reflect our own lifestyle from an distant perspective. In any case however it is a great help for the ancestry researcher.

There were three village social classes in the area that is now called Baden-Wuerttemberg, during the period 1500 to 1800, and perhaps even to 1900.

The first class consisted of wealthy farmers (German=Bauer) (ca 2-5 %). They possessed the big farms. Generally, smaller parts of their farm were owned by them and larger parts were obtained by fief (German= Lehen, Schupflehen, Erblehen) from a landlord or the church or a monastery. Also, these farmers occupied the important village positions, like Vogt (=Governor), village judge, etc.

The common farmers (ca 60-80 %) made up the second class. They possessed land, also obtained by fief. These farmers worked hard, and usually were  able to have a modest standard of living for themselves and their families.

The third class consisted of the day laborers (German= Tagelöhner, in Southern Germany also called Seldner) (ca 20-40 %). They worked for the other farmers for day wages. They were very, very poor and had many children, many of which died immediately after their birth.

There was one profession, which has to be considered separately: the millers. Generally, they were wealthy, often very rich, but also they had a very bad moral image. It was said that they were not always honest (e.g., they would mix flour with sand or gypsum) and, they were considered to be highly immoral. The last statement is based on the fact that the mills were naturally located outside the village (towns: outside of the fortification walls). It was at the miller’s location that events took place which the village would not tolerate within its own walls (prostitution, gambling, excessive drinking/partying) - (And alas, a considerable number of my ancestors were millers, but of course, they were the exception to the rule!)

The word "Bauer" (farmer) not only denoted the profession of a farmer, but was also used as a title. A "Bauer" had to have at least two horses and/or bulls and one plow. A wealthy first class Bauer had six or more horses and a net worth of more than 1000 fl. (=guilders). On the other hand, a third class "Tagelöhner" possessed not much more than a cottage, a vegetable garden and possibly, a goat and some chickens. In order to get a feeling for wealth and poverty, here are some figures from ca. 1800: a good horse cost about 100 fl., a bull about 40 fl. and an old cow 15 fl. The daily (12-hour day) wage for a "Tagelöhner" was six Kreuzer that is one tenth (!) fl. 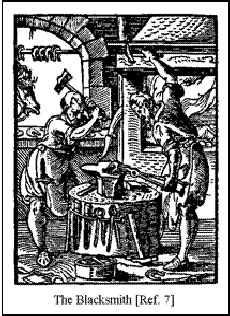 Most of the farmers had a sideline profession that was usually handed down from father to son.

Upper class:  an occupation that brought in the most money: innkeeper.

Before roughly 1820 marriage was allowed only with the permission of the landlord. First of all, the engaged couple had to pay the lord for his permission (2-10 fl). Secondly, the couple had to prove to him and to the community that they would be able to support themselves and their children without any outside help. A minimum net worth of 100 -200 fl. was required for marriage. Since many engaged couples could not come up with this sum of money, a large number of the people remained unmarried. Illegitimate births were a frequent occurrence. The parents of illegitimate children were punished heavily. Both were subjected to a painful interrogation by the village judges and fined (the maximum allowable fine was ca 12 fl). A worse fate was to be exposed publicly on Sunday in front of the church, the woman with a straw garland on her head, the man, with a straw sword at his side. Because of these difficult conditions, many emigrated to Hungary and Russia (mainly before 1800) and to America (after 1800), usually not always asking the lord for permission because he would require some remuneration (dozens of guilders).

For the most part, emigrants were recruited from the middle and lower classes. Often a family group put  all their money together in order for one of their sons to emigrate. They hoped that he would earn enough money in the New World to later pay for their crossing. In many cases, this happened. Upper class people only emigrated when a farm had been willed to one son (not too rare, the youngest one!) and this heir would give his brothers some money to find a new existence outside the village. Another social group for emigration consisted of those persons who were a permanent burden to the community: e.g., extremely poor families, unmarried or widowed women with children, violent persons and prisoners. In these cases, the community paid partly or fully for the crossing. In 1884, the fee for Bremen-New York crossing was 80 Mark (equiv. 60 fl).

An important consideration for family researchers is the fact, that marriage between the classes was nearly impossible. At best, a mixing of classes only took place after disasters like war or plague. The result of all this was that all families within each class of a village and its neighboring villages as long as they belonged to the same landlord were related. This is good for finding ancestor relatives , but bad for identifying specific individuals because many persons had the same name (both first and family names). Researchers must have in mind that before 1800 in the area of Baden-Württenberg were more than 100 tiny countys with jealous landlords . It was not until 1806 that the Grandduchy of Baden and Kingdom of Württemberg were made by Napoleon.

Here some very rough but nevertheless useful rules of thumb for first names related to the sovereigns:

There were rights for self-administration and self-jurisdiction of the villages. The head of the village was the Vogt (=Governor). The lord selected him out of the members of the community. Under him, two or three Bürgermeisters (Mayors) were selected by the Gemeinde (=community). Sometimes, communities owned considerable amounts of land and forest for common use. Not infrequently, the community and the lord would have a quarrel on property rights. What was troublesome for our ancestors proves to be a gold mine for today’s ancestor researcher. I found very valuable information about my ancestors’ families to ca. 1500, two hundred years before the parish records were introduced. In the case of my ancestors, the lord felled trees in the community's forest. The community prosecuted the lord at the Imperial Court of Justice. In the trial, not less than 27 witnesses testified for both parties. In the court, they had to identify themselves and their parents (that is the gold mine of ancestor information!). The trial lasted for more than 10 years. Initially, the community had good chances to win the case, but in the end the parties entered into a  shaky agreement, which kept the quarrel alive for another 100 years.

What I described here is a very condensed picture of a German village in the past centuries. It is typical for the areas in southern Germany. Other places in Germany would be different in some aspects.

For those readers who understand German, I'd like to give some references. Most of the information for this paper I extracted from books, edited by the "Verein für Geschichte des Hegaus" (Society for the History of the Hegau County). Their address:

Concerning the professions, as I am a lover of fairy tales I would recommend highly the last booklet, in the preface of which historical information on the "ehrbaren" (honest) and "nicht ehrbaren" (non honest) trades can be found. As a bonus, you will get some nice German fairy tales on about trades in past times.

I would like to express my special thanks to Jack Lauber, West Chester, PA, USA (Jlauber889@aol.com) for his excellent suggestions and for his great help with the editing of the article.